As we planned and researched our trip to Aruba I actively looked for a sail that would get us out of the hotel and resort area. We love to Snorkel and have taken trips in St Thomas with Pat on the Independence Independence Day Sail and on St John with Busy Bee Busy Bee – Lap of St. John These excursions allow us to gain perspective on the island, learn from people that sail and know the best spots to snorkel. We like a small group versus the large catamaran “party” boats. We are there to learn about the island, enjoy the reef and we like to get to know the people on board and hear about their lives and vacation.

We found out about Tranquilo on Trip Advisor, visited their website and reached out via the on-line inquiry form about the “Famous South Side Lunch Cruise” – Tranquilo web site The response was quick and friendly from Captain Anthony. The price was very reasonable and included food (lunch) and drinks, the sail out to (insert name of reef) and two opportunities to snorkel. A close in snorkel and a drift snorkel. He did not require payment up front, held our spot and gave us great information on where to find the crew and boat on the day of the sail. As the vacation grew closer I needed to change our original sailing date. I emailed Captain Anthony and he responded quickly and offered the sail on Tuesday versus our original selected date of Thursday. We were so glad that there was availability! We got up early as we planned to take the bus in to Oranjestad and needed to be on the dock by 9:30am. We had noticed where the Tranquilo was docked earlier that week when we stayed at the Renaissance Marina. Guests at this hotel would just need to walk across the street to board and enjoy sailing and exploring areas of Aruba with this great crew.

We walked to the bus stop to try to catch the 7:40am bus, thinking that it would take about 40 minutes to reach the downtown area where we would grab a small breakfast and head over to the boat. About 10 minutes before the public bus was scheduled to arrive a small well used white van with windows wide open pulled up. A local woman walked toward the van – and we stood back waiting to see if this was a “private” ride – the driver asked us where we were headed and we told him downtown Oranjestad and asked how much. He told us $2.00 and we hopped in the back. He picked up 2 or 3 other couples along the way, dropping one person at the low rise area and another at Super Foods. The local music playing, wind blowing through the van and feeling the warm Aruban weather was a great way to start this day. We traveled on to the downtown bus drop off zone and departed the bus. The trip had taken a little more time due to the stops for the other passengers and we arrived about 8:40. The streets were just waking up with the stalls selling merchandise to the cruise ship passengers in town that day. There were 3 ships docked and because it was early the streets were not over-crowded yet.

We needed to eat a little breakfast and had planned to go to the Dutch Pancake House but due to being a bit short on time we decided to go to the restaurant in the Renaissance Marina hotel as we knew they had a buffet breakfast that would be quick. We paid a bit more for breakfast ($19per person) but it was quick and easy and gave us plenty of time to enjoy our coffee and walk across the street to the dock about 9:25. We were the first passengers to arrive and Captain Anthony and his 2 person crew were prepping for the day. The young lady that was sailing with us that day looked familiar and we finally asked where we may have seen her before – her ship-mate told us she worked at Moombas Beach Bar as a hostess and it finally clicked for us. As the trip went on we were able to spend some time talking with Rose and found her to be a delightful, interesting and focused young woman.

We waited on the dock and 3 other couples arrived, a young couple from Chicago, a middle aged couple from Boston that had sailed on Tranquilo before, and a couple in their 30’s from San Francisco. After greeting one another the crew invited us to get settled on Tranquilo. We stored our towels and bag – found a seat up front and were offered something to drink as the boat was pulling away from the dock. 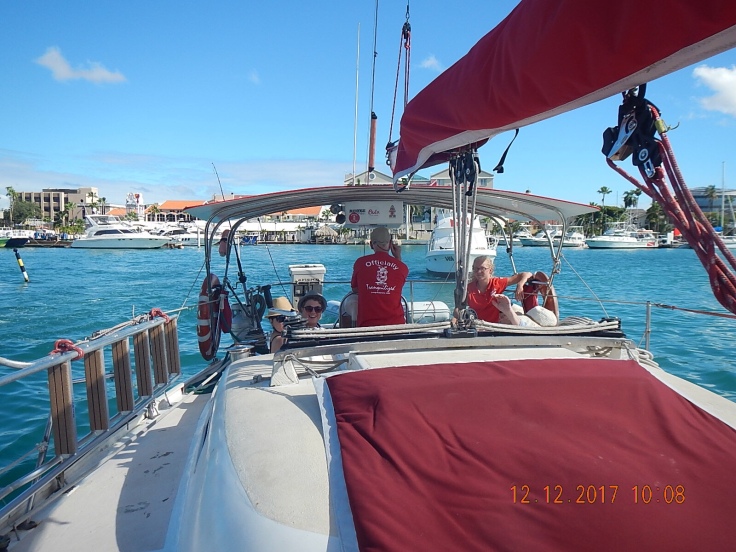 As we pulled out a cute little four legged friend came up from below. He was friendly to all of us but he was fierce as he barked at the passing boats and gave us several giggles with his spirited personality. It was clear that Tranquilo was his boat and he would protect at any cost! We asked if he had ever gone in the water, and the crew said that is why he wears a doggie life jacket – he never missed a beat the day we were sailing though – he scampered from one side to the next barking at fish, boats and keeping watch.

The journey out to the the channel between the airport and Renaissance Island on owe noticed some huts that looked like they had been pieced together from spare lumber and tin for the roof. We asked Rose about these and she told us that these were spots that locals used for “camping”. No one owns the land or the hut – but the locals share these and use it as a getaway spot to disconnect and vacation on their own island. The ones who built them just ask that whomever uses it leaves it the way that they found it.

It took about an hour for us to reach what looked like the end of the channel and open water ahead. The crew told us that the big mountain up ahead was Venezuela, but we were stopping at the dock up ahead. Attached to the dock was a covered wood “patio” structure with benches built in around the covered interior perimeter. There was a ladder off the far side of the patio where we could enter the waist deep sandy area that was encircled by rocks and reef. It was peaceful, quiet and we could not wait to get in the water and see what wonders were below. We climbed down the ladder and into the water it was warm, calm and wonderful. We were told that we could snorkel this reef for about an hour and then if anyone was interested the crew would take people out to do a drift snorkel a bit further down. 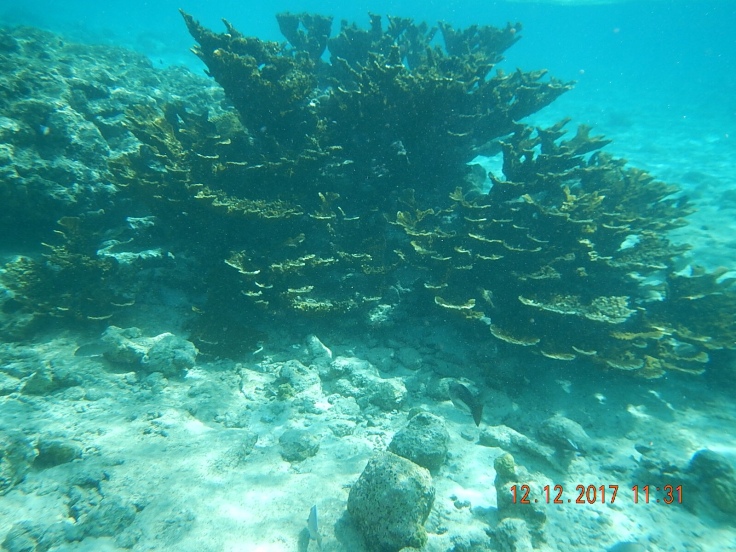 We saw some beautiful coral reef and many fish in the water just off of the dock. There was a bit of a current, but it did not carry us away and it made the swim feel like a light workout which was good considering the rum punch calories we drank later. We swam back to Tranquilo and were the last 2 to climb aboard. No one else wanted to do the drift snorkel but after a brief conversation with Rose about her willingness to go my hubby said he would like to try it. A drift snorkel involves climbing in the small motorized dinghy that we pulled behind the boat on the way out and heading further out to a reef that is a bit deeper (30-40 feet) versus the 10-12 foot deep reef we had just swam through. The swimmers needed to climb back in the dinghy after the snorkel and to save myself the embarrassment of my butt in the air and my arms and legs flailing around I told hubby to go ahead – and have fun!

He said that the drift snorkel was really great, and watching Rose as she dove down really deep was interesting. She has a great love of the water, diving and hubby thought she must be part mermaid. Captain Anthony waited for them and they returned to the Tranquilo about 60 minutes later. The rest of us were enjoying rum punch and once Rose and hubby were back on the boat the crew started to pass the delicious Pea soup, sandwiches and goodies. We all were having great conversation with one another, enjoying stories about each other’s travels and homes. The couple from San Francisco mentioned that they had been on an excursion earlier in the week with a larger group. They said that they enjoyed this day so much more for a couple of reasons. The group was friendly and welcoming – and we all knew that this was a boat of “couples” and no one on Tranquilo treated them any different even though they were both females. It was a very nice compliment for the all on this excursion. It was a diverse group of adults. Older/Younger – Outgoing/Quiet – Gay/Straight- is did not matter we were all out to enjoy the day and our time together.

As we headed back the sails were raised and Captain Anthony was able to showcase his sailing skills. It was a smooth ride with cocktails flowing, great conversation and friendships being made. I have a standard question I usually ask a local – so I asked Rose – If someone asked you to do to dinner tonight – and you could pick ANYWHERE on the island – Where would you choose? She gave me the name of a restaurant that is considered to be very local, and told me the reasons why. After she described it to me I told hubby – Tomorrow is our exploration day – and we are going to this restaurant! (Read about it in my next post)

We arrived back at the dock about 3pm, said our goodbyes and thank you to the crew in the form of some good tips from all of the guest. We walked across to the Renaissance and hailed a cab from the bell stand. We rode back to the Ritz a bit tired but looking brown and toasty from our day in the sun and feeling like we had experienced the real Aruba.