Today was a crisp and cool spring day. Recently we had read about the top waterfalls in Tennessee and Ozone Falls happens to be within an hour drive. We headed out just after noon and took an easy ride down Interstate 40 arriving about 1pm.https://www.tn.gov/environment/program-areas/na-natural-areas/natural-areas-east-region/east-region-/na-na-ozone-falls.html

The parking area is right alongside the road, an informational sign details the location of th trail and how to reach the upper falls as well as the lower falls trail.

We chose to take the upper trail first and we could here the rush of the falls inviting us to explore. It was a short walk over sandstone rocks that were both bumpy and smooth at the same time. we encountered several people on their way back that commented on the beauty. The pooling area at the top of the falls held cool and clear water bubbling over the rocks waiting its turn to run over the smooth rocks and fall down the long drop below.

Standing at the top looking over the edge made me a bit shaky but with careful steps and taking a seat on a flat rock nearby we were able to get some really pretty pictures of the falls from above. 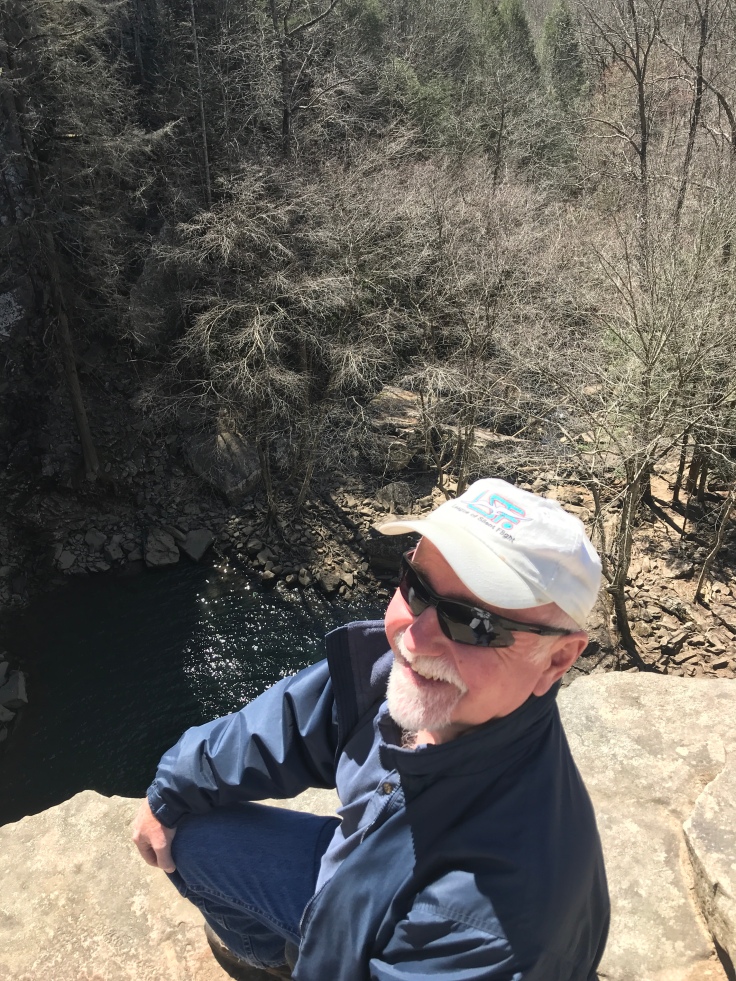 This was a beautiful site and the walk had been so easy that we decided to find and take the lower trail. We followed the trail along the steep cliff and back toward the road where it the trail took a left hook and we were able to step down using the large rocks that made the trail.

Along the trail was the cliff we had just walked along to get down below. There is a cave that is known as the gamblers den in the side of this cliff. The board at the park entrance mentioned that it is named this because legend has it that it was used for that exact purpose in another time. It was a deep cave with some beautiful rock formations and great examples of how the layers of rock and dirt have created the beauty. Some one has written on the rocks and identified the caves name which is a bit disheartening, but looking beyond that we saw such beauty in the way nature had formed this gorgeous spot. 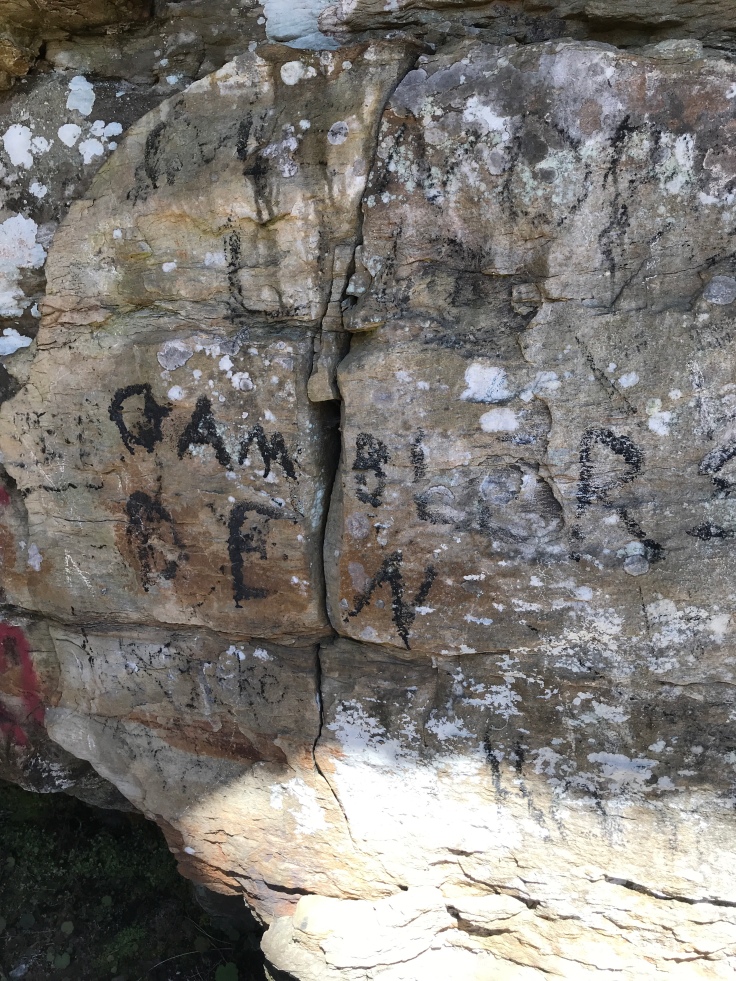 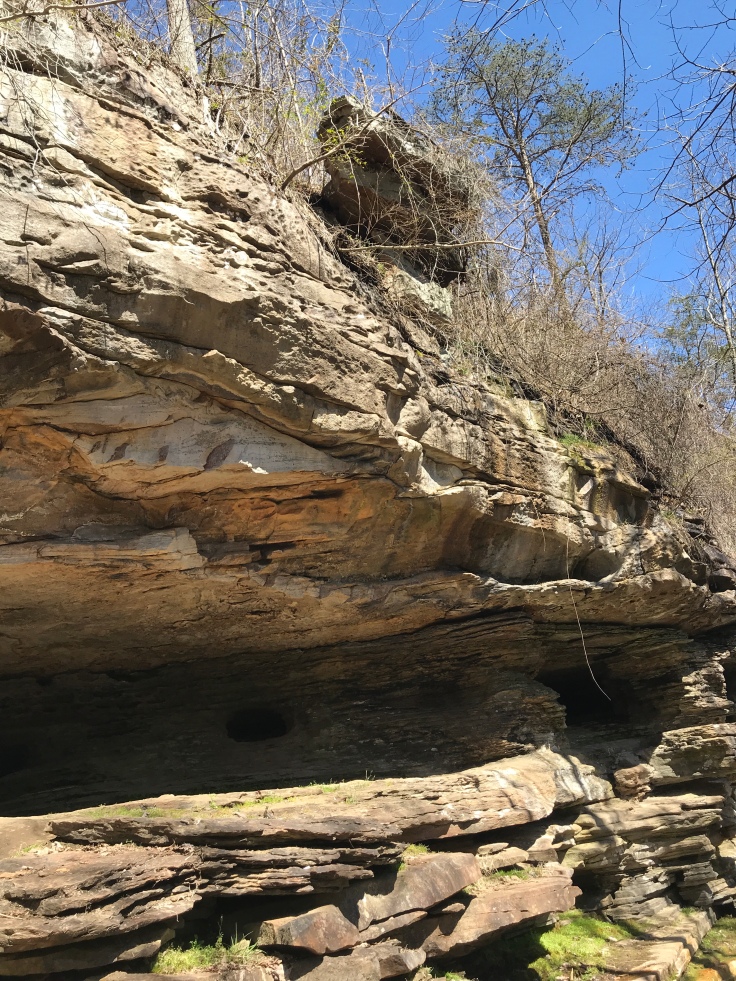 We continued down the trail to where the falls fell into the large pool of water and thought that it would be a great place to return to on a hot summer day to cool off. 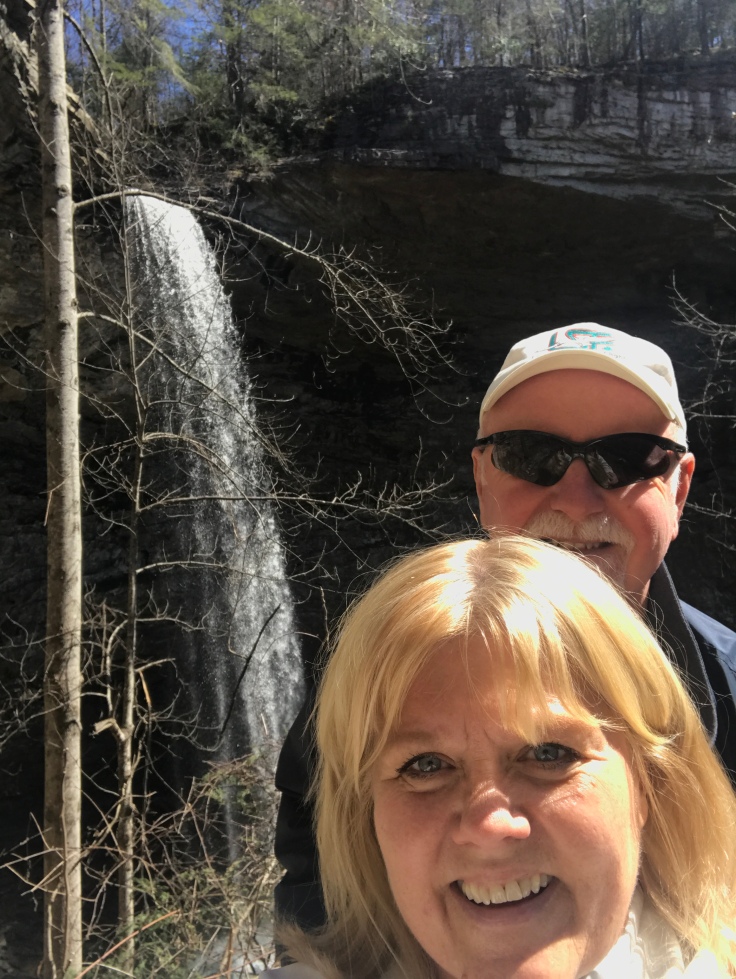 The hike back up the trail was a bit of a rock scramble or a really weird rock and root staircase. We took the trail to the road and compared notes with a few people that had just made the trek back as well. We took another small stroll over to revel in the forsythia bushes blooming on the banks of the Falls creek, listened once more for the sound of the falls and felt thankful for a nice hike on a gorgeous sunny Tennessee day.