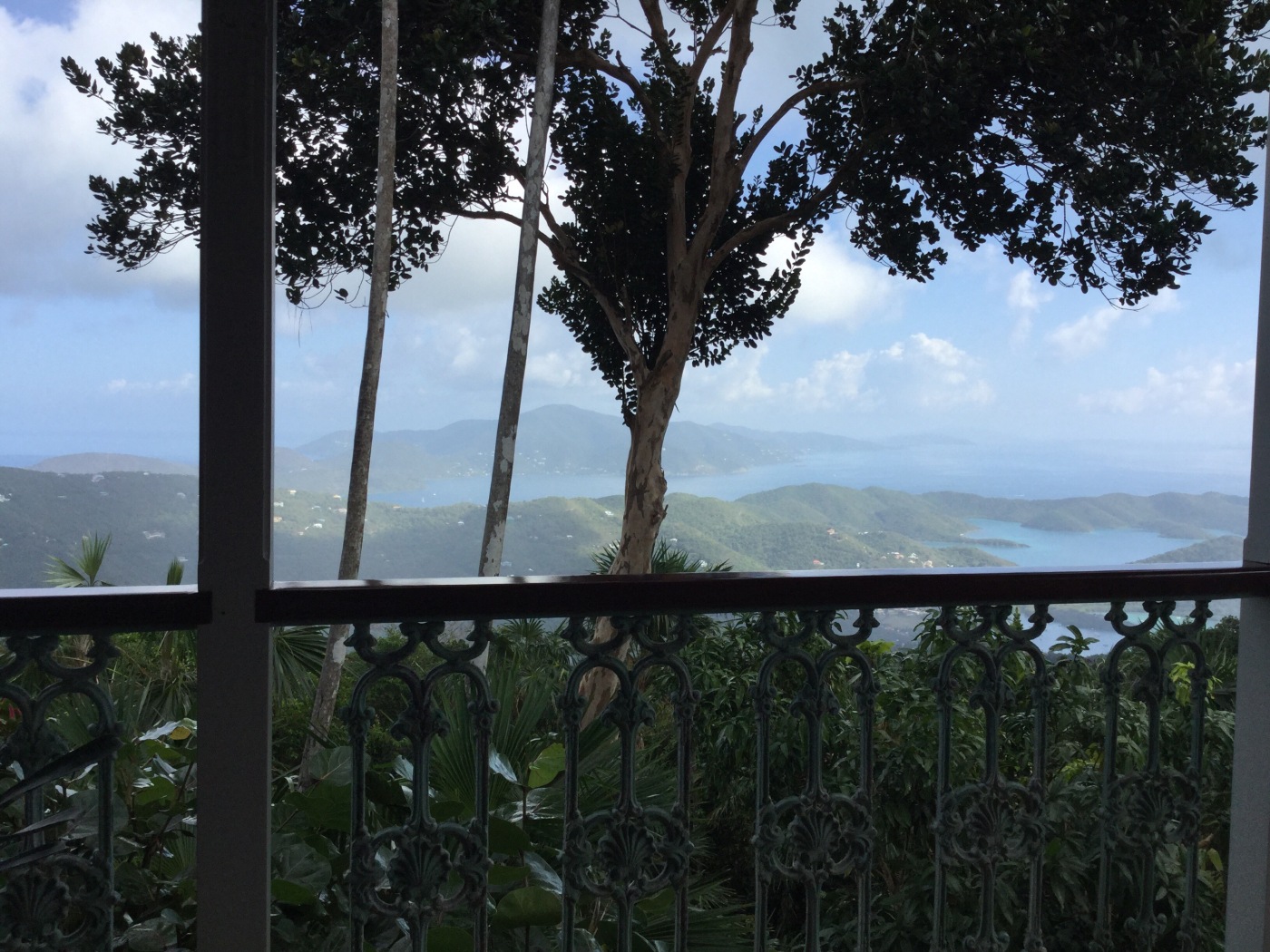 Our flights were from Chicago and Rapid City SD. We chose to fly to San Juan and spend the night on Thursday then fly to St Thomas Friday morning. We landed in San Juan at 3pm, checked into the Embassy Suites San Juan, 5 min by taxi from the airport. We waited for brother and sis in law to come in at 7:30. A visit to the pool to pass the time and a few beers at the hotel cocktail hour and then they walked in tired, but happy to be there. We had asked the bartender at the pool for a recommendation for dinner and the hotel desk gave us directions to La Playita, a restaurant on the water near the airport. The restaurant was was all they raved about and more. We were seated on the deck, with the waves lapping just below us. Coco loco drinks came in a real coconut and the beer was cold and refreshing. For dinner we ordered 2 Mofongo’s one with shrimp and one with steak, an avocado and shrimp salad (bartender recommended) and the skirt steak with chimichurrie sauce. It was a fantastic meal in a restaurant with true Caribbean ambiance. The hotel attached to the restaurant was La Playa hotel a small, 16 room boutique hotel tucked away on a quiet street,oceanside, quiet, with friendly staff that told us rooms cost $160 with a continental breakfast included. We taxied back to the hotel ready to fly over to St Thomas on Friday morning.
We arrived at the airport early, settled in to Terminal A to wait for our flight. We saw the aircraft loaded and realized that we were on what I call a “toy” airplane, a Cessna 402 prop aircraft that scared the crap out of me- but how would I get to STJ if I did not bite the bullet and get onboard. So Vagablond swallowed the fear and boarded the cute little plane. It was not a bad flight and once the borrowed Xanax pill kicked in. :0)
St Thomas airport was not busy, making us decide the coming in on a Friday morning was a very good time to arrive. We had rented two 4 door jeeps from Amalie Car rental on St Thomas, we have used them for 3 years and their cars are clean, well maintained and the service is top notch. One jeep was so new it did not have tags yet so they asked us if we could wait for about 2 hours until the car would be ready. We told them that was fine and we are on #island time so we set off on our way to one of the nearby beaches to grab a beer and hang out. We landed on Brewers Beach. There were 2 local food trucks and we bought beers and parked ourselves under a shady spot to take in the view. There was a quiet beach with a few swimmers and snorkelers, and several boats moored on buoys. After a couple of cold beers, a local tour guide walked past us, his name was Garfield and he had just brought a small group of 6 people from the cruise ship to the beach for a swim. He was headed to the food truck to have lunch and we asked him for a recommendation- he said to have a Pate- it is a pastry filled with the meat of your choice of beef, chicken, shrimp, or veggies and it is a local favorite. We spent time chatting with him for about 20 minutes. He shared local history, some observations about cruise ship passenger behaviors and told us some stories about his own family. It was a joy to learn, socialize and share with this great new friend.
We grabbed another beer and a pate and then headed over to get our jeep.
Trying not to forget that USVI drives on the left, we followed each other to the Plaza Extra grocery store for groceries including, produce, liquor and other food for our villa. We headed to Red Hook to board the car ferry for the final leg of our transport to St John. Ferry ride was about 30 minutes and our villa escort was waiting at the ferry dock. We stopped for ice and was on our way up to our villa up on Bordeaux Mountain.
The villa was gorgeous, well equipped with an awesome kitchen, outdoor grill and lots of technology for music through the house and pool areas. We unpacked, poured ourselves cocktails and sat back to watch the sunset before we had to pick up our youngest brother,the last person arriving via people ferry. We had a brief delay due to his luggage not making the flight from his connection in Miami, but they promised to bring it to the Cruz Bay people ferry dock first thing in the morning, so he jumped into a taxi to Red Hook and took the passenger ferry to Cruz Bay on St John where we met him and made out way to a little Mexican restaurant where we had margaritas and appetizers. We left Cruz Bay and headed to the villa, it was dark but we found our way with no problem. Our first day ended with all of us together, sharing good times and hitting the pillows early.